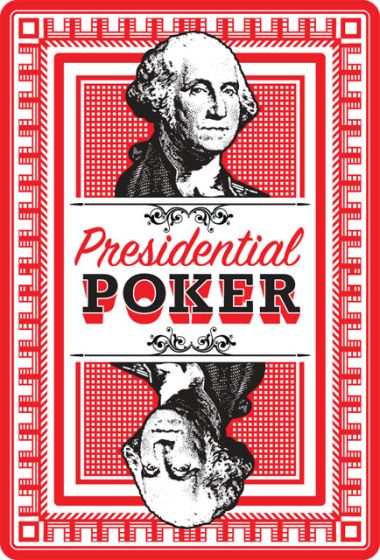 Be the first to review this product
$9.95
AvailabilityOut of stock
SKU
MS-AGCI_PP
When can two pair beat a royal flush? When you’re playing Presidential Poker, where the winning hand is determined by which presidents are in your hand. Whatever your political persuasion, we guarantee that you’ll find Presidential Poker a terrific challenge and way more fun than an interminable election season!
Details

If you’re a poker player, you know that three of a kind beats two pair, and that a straight flush is as good as it gets. But what if that low hand happens to include Abraham Lincoln and Thomas Jefferson?

In Presidential Poker, it’s not only the hands you put together that count, but the historical rankings of the presidents on the cards. Which means that a pair of kings featuring Jefferson and Teddy Roosevelt just might top a straight composed of Andrew Johnson, Franklin Pierce, Herbert Hoover, and a couple of other less-than-stellar commanders-in-chief.

Based on 19 historical polls dating back to 1948, Presidential Poker includes 43 presidents, from George Washington to Barack Obama (some appear twice). Future versions of the game will incorporate new holders of the highest office in the land, including perhaps the first woman. And as new polls are published and rankings change, the value of specific cards (and hands) will change accordingly.

So why settle for traditional poker when you can have Ronald Reagan and Bill Clinton battling it out to determine the winning hand? Whatever your political persuasion, we guarantee that you’ll find Presidential Poker way more fun than an interminable election season!

More Information
Reviews
Write Your Own Review
Only registered users can write reviews. Please Sign in or create an account
Product Questions
Customer Questions
No Questions
Must be logged in to submit questions